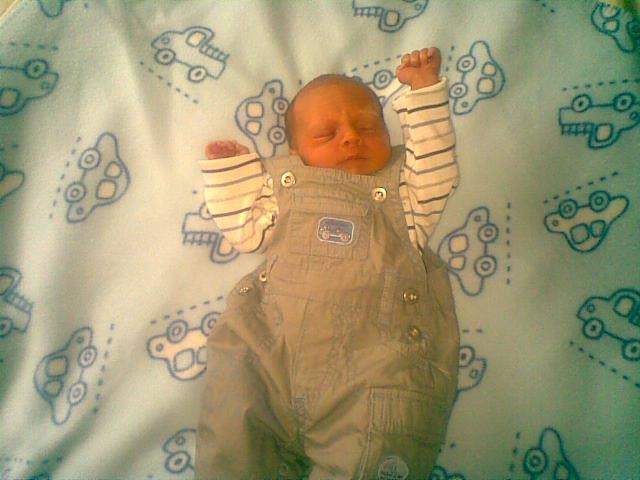 I had my first child when I was 17 years old; he was a shock to the system. I didn’t know I was pregnant until I delivered a baby boy 2-3 months premature born on the 25th of November 2006 at 11:30AM and weighed only 3lb 6oz. He was born at home in the bathroom and I delivered him myself. I called him Callum. I was scared and didn’t know what to do. I was worried that there was going to be something wrong. He was kept in hospital for weeks in an incubator and every time I saw him I just cried, but now he is 5 years old and you would never have known he was a premature baby.

I then found out I was pregnant again a few years later I was overjoyed that Callum was going to have a baby brother or sister to play with. I had such an easy pregnancy I felt great. My waters broke at 1:30pm in the same house I delivered Callum in, but this time I made it to the hospital. I had another baby boy and he was born in Stirling Royal Infirmary one month premature. It was a normal delivery at 7:32pm on the 6th of July 2009, he weighed 5lb 8oz and I called him Robbie after an hour of trying to decide. I was so happy.

Robbie was jaundiced from birth but it started to clear for a short period of time then it came back again. He was very frail looking but he started to fill out a bit and looked healthier and he ate all the time. He was such a happy contented baby, he started to get his own little personality and he was giving everyone smiles and following us all around the room with his eyes. I took Robbie to see the health visitor on Monday the 14th of September and he weighed 14lb 12oz as he was eating lots and I could feel him getting heavier. On the way back from the health visitor we stopped in to visit my gran, he got hungry while we were there so I let my gran feed him and he smiled to my gran from behind the bottle we thought he was being cheeky.

On 17th of September Robbie went to bed as normal in his moses basket in the living room while I watched a film. I woke him up at 12am for his last night feed before I went to bed. He woke me up at 4:30am for a feed and a nappy change and he was a bit sick when I burped him. I thought it was because he had eaten too much but he still seemed his normal self so I stayed awake for a while then finally managed to get to sleep.

Callum woke me up in the morning jumping on my bed he was saying “Robbie is a different colour” I looked in his moses basket and I thought he was still sleeping. Then something clicked that there was something wrong. I picked him up and he was cold to touch and his skin was turning blue. I woke his dad up and dialled 999 and the operator was talking him through resuscitation, while I took Callum into another room. I heard the paramedics in the other room and I felt useless as there was nothing I could do to help. The paramedics took Robbie to the ambulance and I went with them and I kept thinking I was stuck in a nightmare and couldn’t wake my self up. I was on the longest journey to the hospital, when I got to the hospital only then I realised I was in my bare feet and I had no phone to keep in touch with family. I was devastated it felt like my heart had been ripped in two. I wished it was a nightmare and I would soon wake up. I then heard my mum’s voice I ran out to meet her. My partner had contacted her at work and she came as soon as she could. The doctor came into the room where my mum and I were and told us they had done the best they could but they couldn’t resuscitate him. My close family started to arrive to comfort me.

The police came to my house to take pictures and question us, we felt like we were the accused. All I could think was what if I had stayed awake, could I have prevented this from happening? I kept going over everything in my head but couldn’t get an answer to something that has no answers. I had all my family and friends to comfort me but I just wanted to curl up in my own little world of grief. My uncle helped when he told me “things won’t get better; you will learn to cope with it better”. He was right I did learn to cope with it better but I will never forget that day.

Robbie had a service in a church and was laid to rest in a small white coffin. It was a very emotional day and another day I will never forget. He will live on in our memories as we talk about him and look at all the pictures he had taken in his short life. During this time Callum was a little rock for us all. By the age of 3 Callum was depressed then by the age of 5 he was diagnosed with post traumatic stress disorder. Callum went on to have problems in his first year at school, the head teacher advised us to stop talking to Callum about Robbie and stop visits to the cemetery. Callum now sets off sky lanterns in memory of his baby brother he says “it’s to help Robbie’s star shine brighter.”

I found out I was pregnant again I started to worry and panic. I got in touch with Scottish Cot Death Trust and received an apnoea monitor for my own piece of mind. On the 31st of January I had a baby girl and called her Teigan. She was one day late and weighed 6lb 2oz. I used the monitor for 6 months. Now she is a year old and is fit and healthy. That gives me more confidence now as a good mother.